US Social Trust Has Fallen 23 Points Since 1964

Sorry for the hiatus. I keep doing podcasts and articles on other sites for Trust in a Polarized Age, and I don’t want to irritate my readers on social media with too much content. When I get done talking about the book so often, I’ll return to my regularly scheduled blogging.

Lots of people talk about the US decline in social trust. I do all the time. The data I use comes from the General Social Survey, which shows a drop of 46% in 1972 when it began to 31.5% in 2018, and the drop is fairly graduate. But the World Values Survey, taken every 4-6 years in the US, shows a 7 point decline between 1981 to 2017, and there’s no WVS survey between 1981 and 1998 that asks the standard trust question (“Can most people be trusted or can you never be too careful in dealing with people?”) in the US. Also, people sometimes say the WVS is done poorly. So I mostly ignore the WVS and go with the GSS.

However, foolishly, I didn’t realize the awesomely done American National Election Survey (ANES) asked the standard trust question,  starting in 1964. And it has a different pattern. Trust is around 55% in 1964, around 46% in 1972 (matching the GSS), and there’s a gradual decline, but for some reason 2000 and 2002 have social trust at 1964 levels. Then in 2008, trust plummets to just under 30%. Then they stopped asking the yes-no question and went to a five point scale in 2012 and 2016, and there are difficulties translating the 5-point scale (people can be trusted all the time, some of the time, none of the time, etc) into simple percentages. But it looks like trust remains quite low and maybe falls a bit further.

One reason it is cool to have both the GSS and the ANES is because the US was asking the trust question long before researchers were asking it all around the world. Some countries are just getting in the game in the 2000s, and no one but the US seems to have data before 1980.

I don’t know what’s going on, so I just plotted all the years we have data from any of the three surveys, and when I had multiple data points from one year, I just averaged them. From what I can tell, this is the only chart I’ve seen that plots social trust with an ANES-GSS-WVS average. And it is rather striking: a 23-point decline.

Now, other countries have great, big declines in social trust, but this is typically due to a major institutional transition from dictatorship to democracy (Spain, Chile, Romania, and Poland), or big increases, which typically follow periods of institutional stability (Germany and adjacent countries like Denmark, the Netherlands, and Switzerland). But the US hasn’t had anything like that level of institutional instability. So the US is an international outlier because we’ve had a sharp drop in social trust despite institutional stability. I think part of the reason for this is that political polarization, trust in government, and interpersonal trust are in a complex causal feedback loop, as I argue in the introduction to Trust in a Polarized Age.

So, here’s what I think is the most data-rich graph of where we stand (data). It is quite bad. Falls in social trust have big costs. 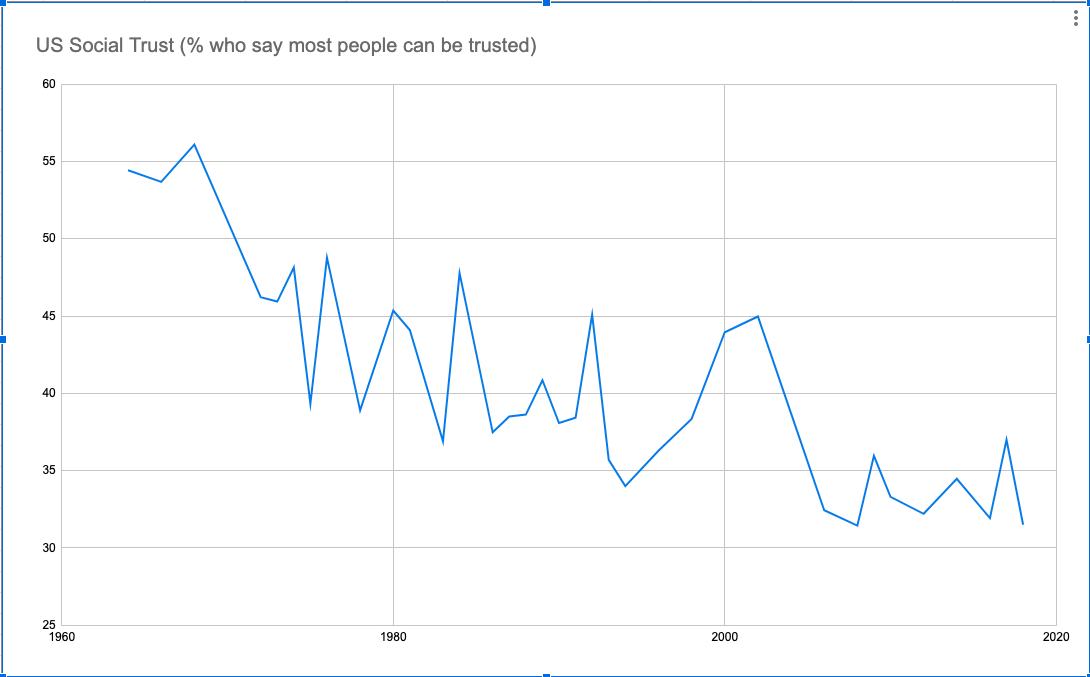