Why Was Anyone Ever Impressed by the Flying Spaghetti Monster? 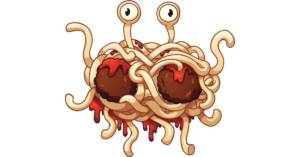 One interesting feature of recent debates about God’s existence is the use of the Flying Spaghetti Monster to deride the rationality of theistic belief (a colorful spin on Russell’s teapot case). What I’m interested in is why anyone was ever impressed with it.

Lately I’ve been studying the history of the Byzantine Empire: its military history, its religion and theology, its philosophy, art, and architecture. It’s amazing to me that there’s an entire empire, lasting one thousand years, that is wholly absent from popular Western culture. When was the last time you saw the Byzantine Empire mentioned in a movie, a television show, or a recent novel? And so what happened? Why did one thousand years of Greek Christian history go down the memory hole?

Anyway, I don’t know. But I am impressed by one thing that survives – neoplatonist influences. I’m impressed by neoplatonists’ ability to continually reinvigorate themselves over the centuries, especially by introducing and refining theological ideas that continue to have broad influence in Christianity. Neoplatonism played an essential role in the development of the doctrine of the trinity, the two natures of Christ (the hypostatic union), the doctrine of the immortal soul, and the Eastern Christian ideas of theosis, and the essence-energies distinction.

So all around the Mediterranean, and deep into Europe, neoplatonism was the state of the philosophical and theological art for centuries and centuries.

For many neoplatonic thinkers (Christian or no), the existence of some sort of deity is philosophically obvious. God/master deity often served as the explanatory ground of almost everything: concepts, knowledge, morality, human purpose, the soul, freedom, and the basis of political order. This isn’t a coincidence. They believed they had arguments beginning from their philosophical commitments and extending to the existence of some kind of chief deity. Some kind of God served a central explanatory role in these philosophical and theological systems.

For neoplatonists, the Flying Spaghetti Monster (FSM) would have seemed a ridiculous analogy with the divine. The power of the FSM is to generate the intuition that God’s existence is random, unnecessary, and absurd. And just as no one should believe in FSM, no one should believe in God. But, again, the finest minds for over a thousand years, and really fifteen hundred years, would have been utterly unmoved because God’s existence was in no way random. In fact, God’s existence was the least random thing imaginable.

The truth is that a single, original deity isn’t going to seem random on any view that prioritizes the conceptual and the mental as ontologically fundamental. Deity just doesn’t look weird on such views. And, importantly, these views aren’t insane, since it is hard to see how the conceptual and the mental as we know them could even in principle originate in the material world. So there must be some mental point of origin or explanation, and that suggests at least one deity, and perhaps only one master deity. I take no stand here on whether those systems must lead to some kind of theism, just that it is entirely reasonable for these philosophical systems to yield arguments for some kind of theism.

So when did FSM start seeming like an interesting analogy? Not the 19th century, since idealism was dominant in many places, and idealists frequently affirmed the existence of either an immanent deity or a transcendent one.

No, it is the dominance of physicalism that gives the FSM its rhetorical power. But this suggests that all the FSM can do is convince people with tacit physicalist commitments that God’s existence is as random and unexplained as the FSM. For again, for centuries upon centuries, almost no reflective person with philosophical training would have been impressed. Instead, the only people who are impressed are those who have absorbed physicalist assumptions. And, while physicalism is influential, it is not only reasonably contestable, but it is probably in some trouble in the philosophy of mind and metaethics. It’s just hard to jam mental and moral properties into the physical world.

Now, of course, many people will say that the only reason various forms of monotheism were dominant for so long is that people were pressured into believing it and absorbed it from their culture. But, first, that wasn’t always true (it wasn’t true in the polytheistic ancient world in many areas). Second, the lines of argument they pursued weren’t at all absurd, or at least no more absurd than modern philosophical arguments for all kinds of things. And third, similar debunking explanations can explain away rational atheism too. One could argue that the reason atheism is common in the academy is that high status academics are often atheist physicalists, and atheism has filtered out of the academy in part because many academics are high-status atheists in the popular culture, like the late Stephen Hawking.

So that’s why I think the FSM impresses some people. It impresses express or tacit physicalists, but other reasonable philosophical systems won’t see a single God as an arbitrary and laughably random postulate. And the philosophical systems that do see God in this way are subject to various difficulties. Now, the Christian God may indeed seem random as a specification of the master deity, but even Christians admit that we only know about God’s Trinitarian structure through revelation. So if you want to impugn the Christian God with the FSM, you have to already think you have a good argument against the idea that the master deity can and has revealed itself as having a Trinitarian form. And that requires a bit more than ridicule, if the existence of a master deity is already on the table.