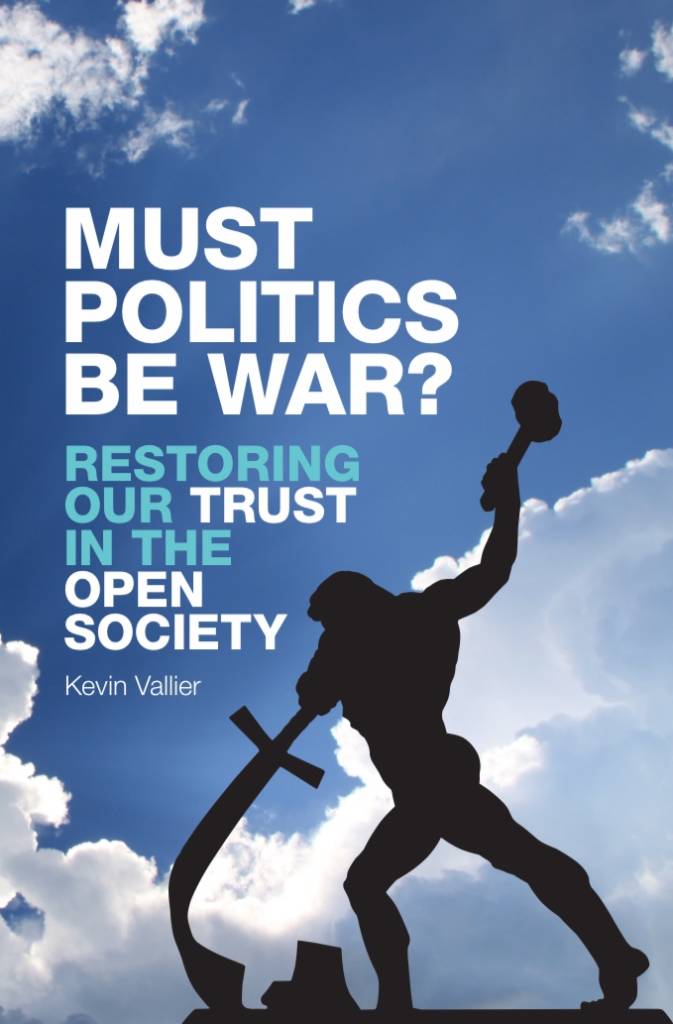 Must Politics Be War? Restoring Our Trust in the Open Society

Americans today are far less likely to trust their institutions, and each other, than in decades past. This collapse in social and political trust arguably fuels our increasingly ferocious ideological conflicts and hardened partisanship. Many believe that our previously high levels of trust and bipartisanship were a pleasant anomaly and that we now live under the historic norm. Seen this way, politics itself is nothing more than a power struggle between groups with irreconcilable aims: contemporary American politics is war because political life as such is war.

Must Politics Be War? argues that our shared liberal democratic institutions have the unique capacity to sustain social and political trust between diverse persons. In succinct, convincing prose, Kevin Vallier argues that constitutional rights and democratic governance prevent any one ideology or faith from dominating all others, thereby protecting each person’s freedom to live according to her values and principles. Illiberal arrangements, where one group’s ideology or faith reigns, turn those who disagree into unwilling subversives, persons with little reason to trust their regime or to be trustworthy in obeying it. Liberal arrangements, in contrast, incentivize trust and trustworthiness because they allow people with diverse and divergent ends to act with conviction. Those with opposing viewpoints become trustworthy because they can obey the rules of their society without acting against their ideals. Therefore, as Vallier illuminates, a liberal society is one at moral peace with a politics that is not war.

Buy on AmazonBuy from Oxford – 30% OFF

“I have tremendous sympathy with Vallier’s project, and I agree with his conclusion that liberal social democracy is the only form of government that can be openly and publicly justified to a large, diverse population. Vallier’s argument to this effect is beautifully constructed and penetratingly clear. His decision to ground an account of public reason in the sociologically plausible experience of trust is especially innovative and welcome. This is an exemplary book within its genre.”
— Douglas I. Thompson, Notre Dame Philosophical Reviews

“Must Politics be War? presents a new vision of how basic forms of social trust can sustain the individual rights that allow people with diverse moral and political views to flourish together in civil peace. Kevin Vallier has written a book that is as philosophically original as it is politically timely.”
— Charles Larmore, W. Duncan MacMillan Family Professor of Philosophy, Brown University

“Kevin Vallier has tackled the key problem for political theory in our current situation–that of the erosion of social trust in a diverse community. He has addressed this problem in the most appropriate way–in terms of the institutional framework that might sustain social trust within such a community. He has argued effectively for the conclusion that key liberal-democratic institutions–freedom of association, the market, the welfare state, and democratic political arrangements–meet the demand that they be reasonable from diverse points of view and hence generally acceptable as providing the appropriate framework for the sustenance of social trust. This is an important book on a topic a high contemporary significance.”
— Fred D’Agostino, Professor of Humanities, The Institute for Advanced Study in the Humanities, The University of Queensland

“In this wide-ranging, deeply informed, and highly ambitious volume, Kevin Vallier returns to the convergence view of public reason and explores its potential for building moral and legal trust in liberal societies which are deeply divided about the good and the right. Vallier’s book lies at the cutting edge of public reason liberalism. It is must-read for philosophers and political theorists interested in the possibilities that view holds out.”
— Paul Weithman, Glynn Family Honors Professor of Philosophy, University of Notre Dame

“…offers a thoughtful and sophisticated elaboration of the public reason approach and carefully answers possible objections from those already familiar with it … Recommended.”
— M. Blitz, CHOICE