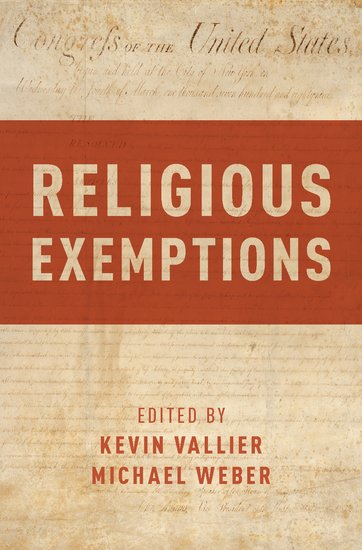 Exemptions from legal requirements, especially religious exemptions, have been a major topic of political debate in recent years. For example, bakers in various states have sought the right to refuse to make wedding cakes for gay and lesbian couples, despite the Supreme Court’s validation of same-sex marriage. Many parents are granted exemptions from vaccinating their children, despite public health laws requiring otherwise. Various religious organizations as well as some corporations have sought an exemption from the requirement to provide contraceptive coverage in employee healthcare plans, as required by the Affordable Care Act (ACA). Religious exemptions have a long history in the United States, but they remain controversial. Exemptions release some people from following laws that everyone else must follow, raising questions of fairness, and exemptions often privilege religious belief, raising concerns about equal treatment. At the same time there are good reasons to support exemptions, such as respect for the right of religious freedom and preventing religious organizations from becoming too closely intertwined with government.

“There is, in short, much in this book to stimulate the novice who is for the first time grappling with the question of religious exemptions and to challenge more experienced readers on this important subject.”
— Edward A. Zelinsky, Yeshiva University, Journal of Church & State